Anne Violin-Wigent is an Associate professor of French. Her previous research analyzed regional variations of the French language in France and the leveling effect of Standard French on regional accents and vocabulary. Her research currently focuses on the effectiveness of explicit instruction in the acquisition of a second language and, in particular, on the development of pronunciation. She is currently working on the second edition of Sons et Sens, La prononciation du francais en contexte, a French pronunciation textbook written in collaboration with Jessica Miller and Frédérique Grim and published by Georgetown University Press in 2013. She has served as the French Language Director and Assistant to the Language Director for many years and has taught a wide variety of classes, including History of the French language, Evolution of French Gastronomy, Teaching Methods, and French linguistics and phonetics to name but a few. She is also actively involved in teacher professional development, with the Michigan World Language Association (President in 2011) and in mentoring undergraduate and graduate students. 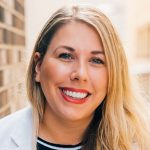 MSU alumna Katelyn Wilcox is the Assistant Chief of Protocol for the State of Michigan where she works to strengthen Michigan’s international alliances. She graduated from Michigan State…Read now »
Close Menu