Kuhu Tanvir‘s research is on non-theatrical circulation of popular Hindi cinema. Her work engages with ideas of media afterlives and transmediation, with a focus on the intersections between popular cinema, television, computers, cellphones and piracy. Her work aims to expand questions of viewing practices, particularly in the digital age, by examining the media landscape of the Global South where the configurations of media infrastructure are drastically different from their counterparts in the developed world. She is currently working on her first book, Cinema in Fragments.

Tanvir is also one of the founding editors of the film and media studies journal Wide Screen. The journal was established in 2008, and since 2012, she has served as the editor-in-chief. In addition to general issues of the journal, she has been the commissioning editor for numerous special issues, including those on videogame adaptations, documentary film as art practice, film and the production of space, and the networks of the Indian studio system. She co-edited the issue on the centenary of Indian cinema in 2013 with Kartik Nair.

Her work has appeared in journals such as BioScope, NECSUS, and South Asian Popular Culture. 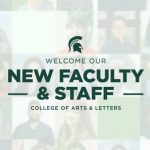 This semester, the College of Arts & Letters is pleased to welcome 22 new faculty and staff members. Please join us in welcoming the following people to Michigan State University and the…Read now »
Close Menu