William A. Johnsen is the former graduate chair and coordinator of undergraduate programs in the Department of English, as well as the former chair of the advisory consultative committee to International Studies and Programs. He is also a frequent director of study abroad programs in the United Kingdom and Ireland.

Currently, he is the editor of Contagion: The Journal of The Colloquium on Violence and Religion, now published at MSU Press. He is also the general editor for a book series at MSU Press: Studies in Violence, Mimesis, and Culture.

His research interests, teaching, and record of publication include modernism, theory, globalization, and comparative literature, as well as Irish, British, and Scandinavian modern literature.

Nine Students Receive 4.0 GPA Board of Trustee Awards
Published May 1, 2020 in College of Arts & Letters 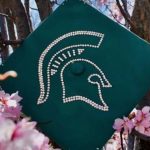 Nine College of Arts & Letters students are graduating with perfect 4.0 GPAs and will receive Board of Trustees Awards for having achieved the highest scholastic average at the end of their…Read now »
Close Menu