Stephen L. Esquith has been working on ethical problems in developing countries since 1990 when he was a senior Fulbright scholar in Poland and then again in Mali in 2005-06. While in Poland he collaborated on two collections of essays written by Polish and U.S. scholars on the changes in Eastern Europe since 1989. His research and teaching since that time has focused on democratic transitions in post-conflict situations. He has written on the rule of law, the problem of democratic political education, mass violence and reconciliation, and moral and political responsibility. He is the author of Intimacy and Spectacle (Cornell, 1994), a critique of classical and modern liberal political philosophy, and The Political Responsibilities of Everyday Bystanders (Pennsylvania State University Press, 2010) on mass violence and democratic political education.

He has been involved in numerous civic engagement projects in the public schools and has led a study abroad program focusing on ethical issues in development in Mali in summer 2004, 2006, 2008, 2010, 2014. He spent the academic year 2005-06 teaching and working with colleagues at the University of Bamako, Mali as a senior Fulbright scholar. There he taught two seminars on ethics and development at the Institut Polytechnic Rural and the Institut Supérieure de Formation et de Recherche Appliquée. He has co-edited a volume of critical essays on the human capabilities approach to development, and recently written on children’s human rights, peacebuilding, the role of film in democratic political education, human security, and philosophy for children. He is currently working with colleagues on several dialogue and reconciliation projects with internally displaced youth in Mali in collaboration with the Universitédes Lettres et des Sciences Humaines de Bamako, La Commission Vérité, Justice, et Réconciliation du Mali, and peace education projects for refugee youth in Michigan.

After serving as chair of the Department of Philosophy for five years, he returned to Michigan State University in fall 2006 to become Dean of the new Residential College in the Arts and Humanities. He has moved back to the faculty full-time in the Residential College on July 1, 2021 to continue his research in Mali and to teach in RCAH, Peace and Justice Studies, and the Department of Philosophy.

At Michigan State, a Disruptive Presidency That Few Could Muster the Will to End

The Chronicle of Higher Education

Can liberal education survive at a scandal-plagued university? A professor explains why it must

RCAH 492: When Words Lose Their Meaning

“Ethics and Development during the Year of Global Africa,” The Engaged Scholar, Vol.13, 2018

MSU Deans Council’s Letter to Board of Trustees
Published January 16, 2019 in College of Arts & Letters 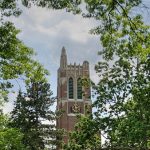 Dear Members of the Board of Trustees of Michigan State University, The pattern of comments by Interim President Engler, including his most recent statement suggesting that some of the…Read now »
Close Menu