David Humphrey received his Ph.D. in Japanese with a designated emphasis in New Media from the University of California, Berkeley, and taught previously at Middlebury College and the University of Notre Dame before coming to Michigan State. His research focuses on the media and culture of modern and contemporary Japan, and he has published in the International Journal of Communication, the Journal of Japanese Studies, Japanese Studies Association Journal, and Japan Forum. He is the author of a forth-coming book, entitled The Time of Laughter: Comedy and the Media Cultures of Japan, which examines laughter and comedy’s rise in late 20th and early 21st century Japanese media culture. He is also working on a second book manuscript on digital culture in Japan.

“The Black Box and Japanese Discourses of the Digital.” International Journal of Communication 14 (2020).

“On Mediating Laughter: Japan, Television, and the Discourse of Cheer.” The Journal of Japanese Studies 44.2 (2018).

JPN369 Japanese Literature and Culture I 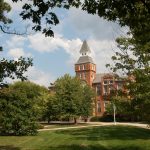